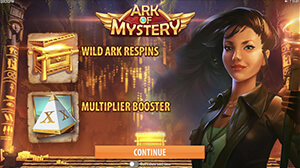 Ark of Mystery promises action-packed gameplay with a multiplier going up to 22x.

The Arc of Mystery slot is the latest addition to the Quickspin portfolio. Launched in October, the slot offers action-packed gameplay with innovative bonus features boosting your winning chances.

Join Anna in Her Quest

The Quickspin latest video slot tells the story of Anna, an intrepid explorer, who set on a quest to uncover the lost treasures of Ancient Egypt. If you are a fan of Lara Croft and Tomb Raider, Quickspin’s heroine might remind you of Angelina Jolie.

The slot uses a standard 5×3 layout with 20 fixed paylines. Its reels are set within the interior of a pyramid with imposing pillars visible in the backdrop. Fire burning on both side of the reels adds to the mysterious atmosphere of the game created by an intriguing soundtrack.

The graphics are rendered nicely with theme-related symbols depicted as Anna herself, the eye of Horus, scarab beetle and Ankh landing on the plain black reels.

Wild Ark Respins and up to 22x Multiplier

Ark of Mystery offers no free spins. Instead, you can benefit from Wild Ark Respins throughout the game. Whenever Wild represented by the ark appears on the reels, it will award a respin during which it stays in its position. What’s more, before a respin starts, Wild Ark will clone to the adjacent position on the same reel. Since Wilds appear on the central three reels only, you can win between 2 and 6 respins.

A maximum possible winning the game awards in a single spin stands at 1,000x total bet.

Quickspin has announced a new slot release Tiger’s Glory. It is due to launch on November 13.