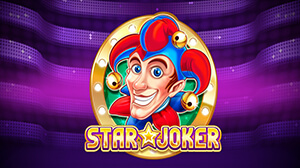 The slot offers a Free Spins round with special Joker Wild substituting for all other symbols.

The leading online games developer Play'n GO has ended the year with a brand new game added to the company's portfolio.

The newest release titled Star Joker is a 5-reel 3-row game with a total of 10 paylines. It resembles classic-themed slots with symbols such as cherries, plums, watermelons, strawberries, diamonds, bells and sevens populating the reels.

Players will need a minimum of two symbols to start getting payouts, rather than three like in most video slots. The game's highest-paying icon is the lucky sevens, with five of a kind across a payline awarding a hefty payout worth 100x the triggering wager.

Before the game starts, players will have the chance to go through a tutorial, where they'll learn more about how Star Joker works.

Placing a wager is simple: just use the horizontal options presented underneath the reels – with plus and minus used to navigate from the lowest to the highest values available.

The Star serves as the game's Wild symbol, substituting for all other icons, except the Scatters. Apart from helping players complete additional winning combinations, the Wild offers pretty neat rewards, going up to 500x the wager for all five of a kind on a payline.

Another potentially lucrative feature is the Free Spins round, triggered whenever three Scatter symbols simultaneously find their place on reels 1, 3 and 5, awarding a total of 10 spins. While the Free Spins round is active, special Joker Wild will appear on the reels, substituting for all other icons and offering a maximum payout of 5,000 coins.

Commenting on the launch of Star Joker, Johan Tornqvist, CEO at Play'n GO, said the game was another quality addition to the company's portfolio.

He pointed out 2018 had been a great year for Play'n GO, as the renowned developer we had released a number of high-profile titles that had performed exceedingly well and added that with its gameplay and interactive elements, this game would be no different.

Star Jocker is available at online casinos powered by Play'n GO and can be played on a wide array of devices, from desktop to mobile, including Windows, Android, and Apple.