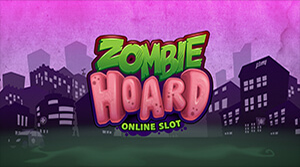 The slot offers a feature-packed bonus round brimming with Super Stacked Wilds and a 2x multiplier.

The renowned developer of online casino games Microgaming has announced the launch of the latest addition to its line-up of slots.

The new release is titled Zombie Hoard and is developed for Microgaming by Slingshot Studios. As you may have guessed from its name, the new game will bring the living dead straight to the reels, which promises plenty of excitement and even more chances of grabbing rewarding prizes.

Zombie Hoard is a 5-reel 3-row video slot with a total of 9 paylines. It boasts stunning visuals and a catchy soundtrack. As players roam a zombie-infested city, their goal will be to survive the undead and try to win as much as possible.

Super stacked Wilds will appear on reels 3 and 4, further boosting the chances for winning in the Main Game. The game's distinctive feature comes in the form of brain tokes, which can be collected as the reels spin. These tokens can be used to trigger the Free Spins round, and its number will even determine how many spins will you get. A minimum of 30 brain tokens is required to unlock the Free Spins round, but the same can be done by landing 3 or more Scatter symbols.

The Free Spins round significantly boost the potential for winning prizes, with super stacked Wilds appearing on all five reels, along with a neat 2x multiplier applied to all wins!

You can see whether you have what it takes to survive the zombie apocalypse at any Microgaming operator.

A Valuable Addition to Microgaming's Portfolio

Speaking about the new game, David Reynolds Games Publisher at Microgaming said Zombie Hoard was an enjoyable new slot from Slingshot Studios, serving up a fun and lively take on the popular zombie genre.

Reynolds pointed out that the Free Spins token collect feature added a great sense of momentum to the game aiding player retention, as players built up their grisly heaps of rewarding brains to gain entry into an excellent, feature-packed bonus round, brimming with Super Stacked Wilds and a 2x multiplier.

He also stated that Zombie Hoard represented an engrossing new addition to the Microgaming’s diverse catalogue.

Richard Vermaak Head of Studio at Slingshot Studios said he couldn't wait to introduce players to a lumbering line-up of creepy and kooky characters, as they experienced spine-tingling fun and thrilling rewards among the great undead!