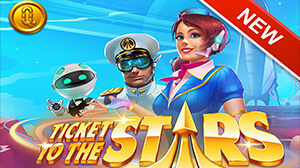 Ticket to the Stars Slot Arrives in Quickspin Casinos

Swedish developer of online gaming content Quickspin has expanded its offering of video slots by adding a new space-themed adventure to its line-up.

Titled Ticket to the Stars, this fresh release will take players on a fantastic retro-looking adventure, packed with exciting features.

The second game the renowned developer has launched in 2019 brings high volatility, which will definitely appeal to those seasoned high rollers. With an average return to player of 96.52% and its vintage appearance, the game will offer dynamic gaming experience.

The Quickspin's latest slot boasts a number of thrilling features, including the Unlimited Multiplier +2 Spins in the Free Spins Bonus, which brings a whole new level of excitement to players from the first to the last spin.

Be on a lookout for the Swooping Reels and stacks of Wilds which can often line up, leading to handsome payouts.

According to Quickspin, the team that developed this slot found its inspiration while reading online articles on space travel. They liked the idea, although they wanted their own distinctive take on it, and that's why they made the decision to use the retro Americana look.

Commenting on the launch of the game, Erik Gullstrand, leading Chief Product Officer at Quickspin, said the company's team had combined the futuristic idea of touring the galaxy with the stylish look of vintage Work Projects Administration posters, all accompanied by beautiful audio compositions.

He pointed out that Ticket to the Stars was an amazing game with lots of exciting features, and stated Quickspin was confident that players would love it just as much as they did.

Gullstrand added 2019 was off to a fantastic start for the renowned company, as it had wrapped up 2018 by releasing Challenges, its new and amazing promotional tool, as well as meeting its ambitious target of 12 new games for the year.

With Ticket to the Stars being the second game this year – and several more waiting to be released soon – he stressed Quickspin was well on its way to meet its new target of 13 new games in 2019.

Quickspin was founded in 2011, and quickly established itself as a leading development studio for real money and social casino gaming. Today, the company owned by Playtech since 2016, represents one of the biggest names in the online gambling industry.