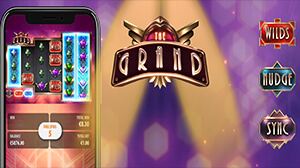 The reels can be synchronized in unison thanks to the Synched Reels feature.

The Swedish developer of online casino games, Quickspin, has announced the launch of the latest addition to the company's portfolio.

The new release is titled the Grand, and bring Art Deco style to the reels, taking back players to the Roaring 20s, and according to Quickspin, the game draws inspiration from the novel The Great Gatsby.

All 6 reels can be synchronized in unison thanks to the Synched Reels feature. Apart from just synching the reels, this feature can appear as pairs of columns with the same height and with the same symbols on it.

The Random Wild feature, as its name suggests, offer players an opportunity for substitute symbols to land anywhere at random. From 4 to 8 Wild symbols can appear anywhere on the reels unexpectedly, but they can't substitute for other Wilds or Scatter symbols.

But the list of features doesn't end there. The Nudge Reels allows punters to shift the reels, which can lead to additional winning combinations being formed. Using this feature can shift a maximum of 3 reels, no matter whether the Free Spins and Bonus symbols are on them.

One of these three features can also be activated by reaching the GRANDomizer, which can be achieved with the help of 3 Bonus symbols. Players can benefit from the Free Spins feature as well, with a minimum of three Scatters required to activate it.

The Grand is a high volatility game, meaning the wins are less frequent but are worth waiting from. Apart from its stunning appearance, the game offers plenty of excitement, with the maximum payouts going up to 2,901.5x the wager.

A Classic Slot with a Sophisticated Look

Commenting on the launch of The Grand, Erik Gullstrand, Chief Product Officer at Quickspin, said the company had wanted to create a classic slot with a sophisticated look, something elegant that would make players think of black-tie events, ballrooms filled with beautiful people and expensive jewellery.

He added Quickspin had also wanted to combine this classic look with contemporary features and thrilling gaming experience, to create something completely unique and original!

You can check out whether they managed to do so at any Quickspin-powered online casino.