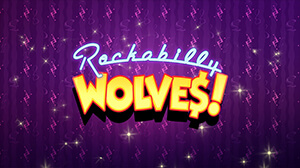 Microgaming has recently added a new game to its extensive offering of video slots.

Developed exclusively for the renowned operator by Just For The Win, the new release is titled Rockabilly Wolves and promises an unforgettable gaming experience with a ton of fun.

Get Ready for Rock'n'Roll

In addition to this, the game has a number of exciting features on offer, such as stacked Wilds, respins and free spins, designed to help players win.

This 5-reel 3-row slot with 20 paylines boasts stunning visuals, with its reels being populated with a wide variety of icons including stacked symbols which appear in the main game. Players will encounter the Rockabilly Wolves themselves on the reels, as they make their appearance as stacked Wilds.

The Bonus symbols, used to activate the Free Spins round, can exclusively appear on the three middle reels. Landing two of them brings excitement as players are awarded a second chance respin, with the reel without a bonus symbol on it spinning one more time while the others stay locked in play.

Once the Free Spins round is triggered, players will receive a 2x multiplier, while its size can be increased whenever a multiplier sticky Wild, going up to a maximum of x6. Sticky Wilds bring even more fun, increasing the potential for getting high-paying winning combinations, and allowing players to grab up to three additional spins.

The Game Is Sure to Be a Hit

Commenting on the launch of the game, David Reynolds Games Publisher at Microgaming said Rockabilly Wolves threw players back to an age of cuffed jeans and perfectly coiffed quiffs, delivering thrilling high volatility gameplay along the way.

He pointed out that colourful visuals evoked vintage animations, melding with an energetic soundtrack that neatly echoed the 50s rock ‘n’ roll era, driving the excitement of every spin with twanging electric guitars.

Reynolds also said that energy would never let up in this fantastic title from Just For The Win with free spins feature loaded with rewarding sticky wilds and multipliers up to 6x, and with the Free Spins feature that could be extremely lucrative, while players could look forward to payouts going up to 2,400 their stake on a single spin!

Rockabilly Wolves have already hit the market and can be played at any of online casinos powered by Microgaming.