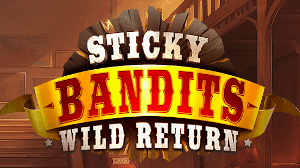 Quickspin Releases the Sequel to Its Popular Western-Themed Game

Quickspin has just added a brand-new release to its offering of video slots.

The new game represents a sequel to the developer's popular Sticky Bandits slot, while players can look forward to an exciting game with numerous chances to scoop big prizes.

Welcome to the Wild West

Titled Sticky Bandits Wild Return, Quickspin's new game features a Western theme and is set in a saloon called The Three Skulls, while telling the story of three bandits. The game has a 5-reel 4-row layout with 40 paylines and with several potentially lucrative features on offer.

Among symbols populating the reels, there a couple of the players will want to see more often, such as the Skull icons, massive 2×2 and 3×3 symbols, Sticky Wilds, Quick Slot Bonus, Lucky Shot Free Spin Bonus and Regular Wilds.

The Skull symbol serves as the Scatter with three of a kind needed to activate the game's Free Spins round. Called the Lucky Shot Free Spin Bonus Round, this feature starts with 7 spins on offer and has the highest win potential.

The Quick Slot Game brings a classic look, but don't be fooled by its appearance as it offers modern prizes going up to 500 coins per spin!

While the Free Spins round is active, any Bandit symbols appearing on the reels will turn into a Sticky Wild, with regular symbols turning into a Regular Wild. The latter is removed from the reels after a spin is completed.

Sticky Bandits Wild Return is a high-variance game, with an average return to player (RTP) of 96.22%. The maximum available win is worth 1,145 times the triggering bet!

Commenting on the recent launch, Erik Gullstrand, Chief Product Officer, said the first Sticky Bandits was one of the classics in the company's portfolio, and also one of their top-performing slots. He explained that one day the team had got talking about it and they had wondered what it would be like to do a follow up with the same bandits and what that might look like.

Gullstrand further said they had wanted this game to be bigger and bolder in every way and added that was the reason they had incorporated a shootout where the bandits turn into Sticky Wilds.
You can check out Sticky Bandits Wild Return by visiting any Quickspin online casino.