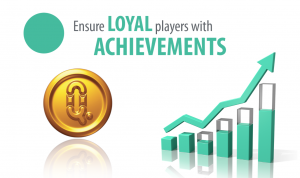 Sweden-based developer, Quickspin, member of the Playtech Group, has announced the debut of its innovative new Achievement Engine, created specifically with the goal of offering more entertaining and much more lucrative gaming experience.

How Does the Engine Work

When a player triggers one of the six unique game events in a video slot, he'll be awarded with Quickspin Tokens. These events include the Scatters landing anywhere on the reels, or a standard play win with two Wilds.

All player achievements are divided into four levels. After a level is reached, the player will get a certain amount of Quickspin Tokens, which can then be used to trigger the game's various Bonus features.

Each Quickspin video slot will have a special page, where the players can have a full overview of their progress, their claims and received awards. The people behind this idea claim it will improve the entertainment side of the games, but at the same time it will offer significant prizes.

A New Era in Gamification

The Quickspin Achievements Engine will debut on April 11, when the first game to feature this engine is scheduled to be released. Sakura Fortune, a five-reel video slot with 40 paylines brings the enchanted world of samurai warriors to a device near your, with mesmerizing gameplay and hefty rewards.

The latest Quickspin addition to their offer is the part of Playtech strategy aimed at additional real-time engagement. The goal is to offer the players insight into their gaming, with plenty of rewards.

According to Daniel Lindberg, the CEO of Quickspin, the Achievement Engine is a perfect example of how the gamification process should look like. The rewards players receive further add value to the entire experience, which increases player engagement.

He added the Achievements Engine would set the new standards in the industry.

Quickspin was founded in 2011, and the company didn't take long to position itself as one of the leading names in the business, with some of the top names in the industry being on their client list. With offices in the United Kingdom and Malta, Quickspin has been a part of Playtech since March last year.