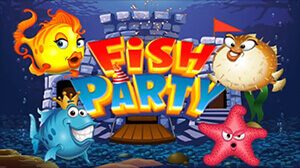 Microgaming has recently made an announcement that one of the game's from its line-up paid out a record-breaking jackpot.

The game in question is the Fish Party video slot, which awarded a staggering prize worth €317,849.78 in total.

Three fortunate punters will be taking this sum home, won around midnight GMT in the €20 buy-in tournament held on October 17.

The three players were playing from two different casinos! “Grndonlck” won €63,569.96 while playing at the RedKings casino, the runner-up was “Check_Norris”, who hit the jackpot of €95,354.93 at Betsson Casino, while the winner of the biggest prize was a player nicknamed “SipsCommin”, who also managed to score such a big win on the RedKings platform, taking home €158,924.89.

This game may have a short history, as it was launched two years ago, but it has been a history written in wins. Since it hit the market in 2016, Fish Party paid out a total of 22 jackpot, worth more than €1.2 million combined.

In the last three months, the game awarded three jackpots, and it's slowly but surely becoming more and more popular among players around the globe.

Commenting on this remarkable achievement, Alex Scott, Microgaming Head of Poker said this had been an exciting three-handed battle and congratulated the lucky winner. He added the company's unique Fish Party progressive jackpot SNG had awarded over €1.2 million in jackpot prizes, a milestone Microgaming was very proud of, and stated that at this rate, it wouldn't be long until the game hit two million!

Fish Party video slot is a five-reel three-row game, offering 243 different ways to win. It offers a vibrantly coloured underwater theme, with nice graphics, beautifully designed symbols, and an exciting gaming experience. The game has the usual list of feature you may find in low to medium variance games such as free spins bonuses, multipliers, Wilds, and Scatters.