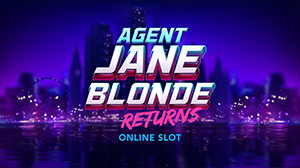 The sequel to the popular Microgaming slot benefits from stacked Wilds and respins.

Agent Jane Blonde has once captured the hearts of punters around the world and is set to do it again in the new video slot.

The iconic superspy returns to the reels after 14 years in the new 5-reel 3-row video slot with 15 paylines. The game features stunning visuals along with a catchy retro soundtrack. Players will join our hero, as she gets ready to infiltrate a clandestine organization while at the same time chasing stacked Wilds and respins.

On the reels, you'll encounter Agents Jane's car and a collection of gadgets, while her disguises appear as four of the game's highest-paying icons. Agent Jane also serves as the game's Wild, which can appear stacked to further boost winning combinations.

Two Scatter symbols trigger the Respin feature, and once it's on, the landed Scatters will turn into Wild, staying locked in their position until the feature comes to an end. Locking additional Wilds is possible, meaning players can fill the entire grid with these symbols!

Following its premiere at ICE Totally Gaming in London, back in February, the game is finally available at online casinos powered by Microgaming.

Commenting on the launch of the game, David Reynolds, Games Publisher at Microgaming said Agent Jane Blonde Returns marked a victorious comeback for the celebrated superspy. He added that Stormcraft Studios had excelled in delivering a stylish slot experience, offering new and returning players the chance to dive undercover alongside the company's leading secret agent for a rewarding new adventure.

He pointed out that high-action gameplay was enriched with lavishly designed graphics and a breathtaking synthesizer soundtrack, which dynamically altered to enhance the heightening drama.

Terence Igesund, Executive Producer at Stormcraft Studios, stated his company was thrilled to be bringing Agent Jane Blonde out of retirement in this carefully crafted and beautifully realized game and added everyone was looking forward to sending the popular spy out on her new mission.