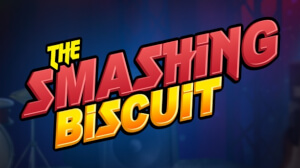 The industry's leading developer of online casino games Microgaming has announced the launch of its latest release.

Titled The Smashing Biscuit, the company's newest addition to its extensive offering has been developed exclusively for Microgaming by PearFiction Studios.

Featuring an interesting punk rock band theme, The Smashing Biscuit brings a standard 5-reel 3-row layout with a total of 20 paylines. The game's main protagonists are the three Biscuit Brothers, Soggy, Crunchy and Tiny, who are looking for their 15 minutes of glory and a chance to reach stardom.

The fresh slot boasts stunning graphics and a punk rock soundtrack, while the game's exciting and potentially lucrative features and mechanics further enhance its playing experience.

Built around a guitar designed amplifier, this action-packed game has two distinctive features available in the Main Game. These features are a multiplier ladder and three different Dad Bonuses, awarded at random.

As the Biscuit brothers prepare for their competition, the multiplier meter gets filled. However, Mr. Biscuit can crank it up thanks to the randomly awarded Dad Bonus, which can bring instant wins or even trigger the Battle of the Bands free spins round.

Once the Free Spins round is triggered, a new four by three playing grid will appear on the screen, bringing along a number of special symbols used only during this feature. When any of the Biscuit brothers help form a winning combination, they will turn into a Wild symbol, staying like that until the feature comes to an end. Be on a lookout for all three brothers transforming at once, as this can lead to handsome prizes!

Commenting on the launch of this release, Jagoda Barber Head of Games at Microgaming said they were delighted to add The Smashing Biscuit as the latest exclusive game to Microgaming.

She explained that The Smashing Biscuit offered an abundance of intuitive features, entertaining sound effects and an engaging storyline, along with exhilarating excitement from the very first spin.

Barber pointed out the game was set to bring players on a rewarding journey.

The Smashing Biscuit can be played at any online casino powered by Microgaming.