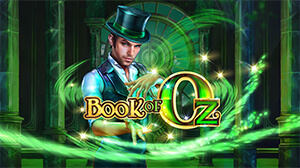 The slot allows you to use the Re-Spin feature for an additional chance of winning.

Titled Book of Oz, this fresh release brings a 5-reel 3-low layout with 20 paylines and high volatility, which is a feature that will surely be appreciated by high rollers.

The fantasy-themed game combines fantasy, magic, and adventure into one thrilling release, filled with excitement and with plenty of chances to win treasures on offer.

In terms of features, Book of Oz offers Wilds, Scatters, Free Spins, and Re-spins, while the reels are populated with beautifully designed symbols, such as the lion of courage, the potion of love, the mystical wizard and the golden book.

The Wizard’s Book is both the game's Scatter and the Wild, and because of this, it has the power to bring huge cash rewards. Landing a minimum of three Scatters will trigger the Free Spins round while depending on the number of symbols used to activate this feature, players will get 10, 12, or 25 spins.

The Free Spins round can be extremely lucrative for those lucky enough, with payouts going up to 5,000x the bet ready to be taken.

The Re-spin feature will further enhance the main game since it gives players a chance to increase their winning by respinning a single reel separately at an additional cost.

Both Sides Happy with the new Release

Commenting on the launch of the new title, Brendan Walton, Design Lead at Triple Edge Studios said his company was extremely excited to release Book of Oz, their fifth game this year. He added that creating this game had been extremely fun, and especially commended the Re-spin feature as a brilliantly fun addition.

David Reynolds, Games Publisher at Microgaming, pointed out Book of Oz was another fantastic creation by Triple Edge Studios enriched with magical artistry and packed with rich game mechanics. He stated Re-Spin feature would add a new dynamic twist to the overall gameplay, enhancing the level of engagement as it combined extremely well with the win potential in the game.

Book of Oz has already gone live and can be played at any online casino powered by the renowned developer.