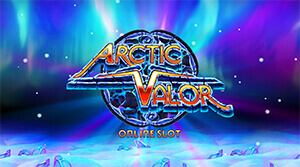 The Isle of Man-based developer of online games Microgaming has announced the signing of an important new partnership agreement.

The new deal with Crazy Tooth Studio will see a new game being added to Microgaming's line-up of slots. Titled Arctic Valor, the new release is a 6-reel 4-row game with 4,096 different ways to win bringing a Norse theme to the reels.

Players will have the chance to see Valkyries go into epic battles, with stunning visuals and interesting features making the whole experience even more exciting.

On the reels, players will encounter gleaming weapons and vibrantly-coloured snowflakes, while Valkyries will have the power to appear stacked on the grid accompanied by top-notch animations.

The Falling Icicle feature will see icicles being formed above the reels with every new spin offering a chance for them to fall down on the reels, covering up to three symbols. Breaking the icicles will reveal neat prizes, which include cash rewards or symbols transformed into Wilds.

Whenever 3 or more Scatters land on the reels, the Bonus Free Spins feature will be activated, and players will receive a total of 7 spins. While this feature is active, icicles will fall down more frequently, while stacks of Valkyrie symbols will bring even bigger prizes.

Commenting on the launch of the game, David Reynolds Games Publisher at Microgaming said Arctic Valor provided a visually stunning journey into a land of ice and snow, complete with a fantastically vibrant, Norse-tinged atmosphere. He pointed out that with 4,096 ways to win, players could also look forward to smashing their way through to some truly epic rewards via the game’s unique and suspenseful icicle feature.

Ben Hoffman President at Crazy Tooth Studio stated his company was very excited to be working with Microgaming, whose extraordinary position in the market, a diverse portfolio of excellent games and an extensive list of operators would enable the company to greatly diversify our capabilities and deliver our range of innovative slots and games to new audiences.

Arctic Valor can be played at any online casino powered by Microgaming.