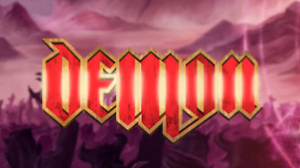 Play'n GO has recently added a brand-new music-themed video slot to its offering. This release, titled Demon, draws its inspiration from the cult heavy metal band of the same name, that was very popular during the 1970s and 1980s. The band has stayed active to this day, inspiring numerous other musicians, such as Def Leppard and Iron Maiden.

A Real Treat for All Metalheads

Demon comes with 5-reels, 3-rows and a total of 30 paylines. Populating the reels are symbols featuring the band's past album covers, and its lead vocalist Dave Hill. Other symbols have been selected from the band's LPs, with at least 3 of a kind needed to start receiving payouts.

The game features two substitute symbols. The first one is the Wild Mask, appearing on the middle reel and combining with a Dave Hill icon. Once this occurs, Dave will act as a Wild symbol for a single spin.

Another substitute symbol is the Wild Amulet. This one can land on reels 1 or 5 while pairing with the Wild Mask triggers the One Helluva Night Free Spins feature. Players can grab up to 11 spins, while their winning can be further boosted with the help of a randomly chosen multiplier.

You Won't Be Disappointed

But that's not all as Wild Amulet symbols can appear again, unlocking the Depths of Hell Nested Free Spins, which can offer even more benefits. That's not all, as players can listen to some of the band's greatest hits as they spin the reels!

Commenting on the launch of the new game, Maring Zettergren, Chief Operating Officer at Play'n GO said Demon was another great release for the company as they moved into the final stretch of this year, ensuring that they finished the year with the consistency and strength shown across 2019.

He added the developers really captured the spirit of the band when creating the game, giving it that something extra.

Embark on this musical adventure at any online casino powered by Play'n GO.