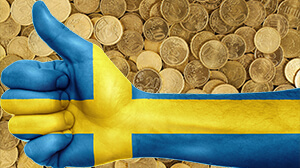 Gambling Market in Sweden on the Rise, Say the Latest Results

Operators with Swedish permits ruled the market in the first three quarters of 2018.

The Swedish gambling watchdog Lotteriinspektionen recently announced the figures for the first three quarters of this year.

According to available information, the country’s gambling market generated €1.6 billion in gross gaming revenue during this period.

This result represents a humble increase of 1.2% when compared to the corresponding period of 2017.

The reports also revealed that operators with Swedish license had generated €1.18 billion during the same period, recording a 2.4% drop in their gross gaming revenue. Those operators without Swedish permits recorded a rise in revenue – 12.4% to nearly €433 million.

Operators with Swedish permits ruled the market in the first three quarters of 2018, with their share reaching 73%, while the remaining 27% was accounted for those without a permit. The data reveal online gambling has gone up by 12.9%, while land-based operations have seen a drop of 8.4%.

At the same time, both betting and online casino increased, by 13.6% and 11.9% respectively.

The state-owned company that operates in the regulated gambling market in Sweden, Svenska Spel, posted €622.7 million in gross gaming revenue, which represents a drop of 1.6%. And while land-based gambling saw a decline of 9.4%, online recorded a substantial growth of 22.5%.

Folkspel, together with Bingolotto and Sverigelotten took home €33.6 million in gross gaming revenue, 1.3% less than in the same period of 2017.

The Swedish Postcode Association announced its gross gaming revenue had reached €155.7 million, which represents a drop of 5.1%. At the same time, Miljonlotteriet took home €16.6 million – 24.8% less than last year.

Operators without Swedish permits saw their gross gaming revenue climb by 12.4% to €437.9 million.