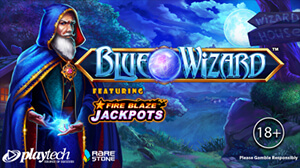 Playtech has announced the launch of its latest video slot, the latest instalment of the popular Fire Blaze series.

The Fire Blaze series was initially launched in April and has since become very popular among punters around the globe. So far, two games have been added to this series – Sky Queen, and Pharaoh's Daughter. The latest addition titled Blue Wizard should be as equally popular.

Blue Wizard is a 5-reel, 3-row video slot, with a total of 30 fixed paylines, drawing its inspiration from an ancient culture, along with a mystical theme. The most appealing aspect of the new game is the fact it offers four jackpots – Mini, Minor, Major, and Grand, with the latter, being the most lucrative one.

Playtech's new game will appeal to experienced players, as it boasts high volatility, along with an exciting gaming experience that is sure to keep players seated for hours. The new release comes with a distinctive feature designed to help players win the aforementioned jackpot.

This new magic-themed game features a Free Spins round that can prove to be extremely lucrative. To trigger it, simply land 3 or more Scatter symbols anywhere on the reels, and you'll be allowed to scoop handsome prizes with the help of the Wizard Wilds and multipliers.

It's All About Hitting the Grand Jackpot

Landing a minimum of 6 Crystal Ball icons will activate the Fire Blaze Hold and Respin feature, which has the potential to award you a jackpot. Although there are four of them on offer, the ultimate goal of this round is to snatch the Grand Jackpot and to do so, players will need to fill all 15 symbol positions with Crystal Ball bonus symbols. If they manage to do so, they can look forward to a massive payout worth 2,000 times the triggering wager!

Playtech has also announced it plans to add two new games to the Fire Blaze series next month. Both these games – titled Tsai Shen’s Gift and Eternal Lady – feature a theme from the ancient Chinese culture, and promise to bring exciting new features.

Visit any of Playtech-powered online casinos and check out the new Blue Wizard slot.