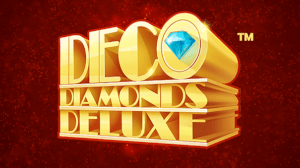 Microgaming has announced the launch of its latest game, a sequel to the popular Deco Diamonds slot launched back in January last year.

The art-deco theme makes its comeback to the reels in the brand-new release, developed exclusively for Microgaming by Just For The Win game studio.

This glitzy 5-reel 3-row game with a total of 9 paylines, promises to take players to an exciting high volatile adventure set in the Roaring 1920s.

In addition to vibrant colours, and a catchy soundtrack, Deco Diamonds Deluxe offers plenty of chances to scoop net prizes, thanks to exciting Wild and Deco Diamonds Deluxe symbols. The former can award respins and trigger the Bonus Wheel feature while landing at least 3 Deco Diamond Deluxe icons will award a respin while locking Wilds into place. The remaing reels will then spin, which lead to winning additional spins.

Get ready for the Just For The Boos feature, as it will surely add to the excitement. Using this feature will increase your bet by 50%, while at the same turning on the Deco Diamonds Deluxe Symbol Nudge feature. In practice, this neat feature enables reels to shift one position to help a symbol end up on the five-by-three reels area. Utilizing this option can lead to handsome prizes, especially when this symbol is the Wild.

The one feature players will want to see activated more often is the Bonus Wild, which is activated whenever 3 or more Deco Diamond Deluxe symbols make their appearance on the reels. There are three levels available: Silver, Gold or Diamond, with each of them offering bigger payouts. The Diamond level is the most lucrative one, offer massive wins of up to 1,000 times the original wager.

Commenting on the recent launch, James Buchanan Director of Global Operations at Microgaming said Just For The Win had successfully built a captivating sequel. He explained that The Just For The Boost with Deco Diamonds Deluxe Symbol Nudge represented a perfect addition to this title, allowing for the opportunity to turn near-misses into fantastic wins and triggering a spin on the coveted Bonus Wheel.

Johan Persson, Chief Executive Officer at Just For The Win stated Deco Diamonds Deluxe was a glamorous, art-deco inspired slot with all the charm and excitement of the Jazz Age, with glistening diamonds, fruits and a full cast of glittering symbols zooming across the reels, complemented by a superb soundtrack.

The Roaring 1920s await at any Microgaming-powered online casino.