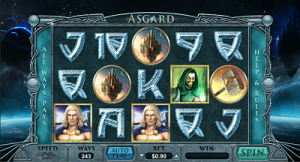 Realtime Gaming kicks off 2018 in style with Asgard slot game.

Although the game is not officially related to the latest Thor installment, Ragnarok, it's more than obvious where does it draw its inspiration from.

This means the players will encounter familiar characters such as Loki, Odin, and Thor himself. The five-reel game with 243 different ways to win also features the fictional realm Asgard, based on the realm of the same name from Scandinavian mythology.

The game offers plenty of opportunities to grab hefty prizes, which can be easily done with the help of the golden Wild symbol, which will not only assist you in completing winning combination but will also double their base value. Be on a lookout for the Thunderbolt feature, which is randomly triggered and which can turn one or more reels fully wild at the end of any spin.

Landing a minimum of three Bonus symbols will activate the game's Free Spins feature. The first time this round is triggered, a player will enter the Goddess round where his winnings will be tripled! The fifth time this feature is activated will start the Loki's Magic round with 20 spins available along with a wild middle reel and randomly given extra Wilds.

For All Fans of Fantasy Movies

The tenth triggering of the game's bonus feature will see Thor oversee the Thunder God games, with 25 sins and up to 6x Wild Multipliers at hand, while the fifteenth occasion will activate the fantastic Valhalla feature. Odin will grant 30 spins, whereas the symbols will be able to turn into others, resulting in rewarding payouts.

The game has recently been launched at a number of RTG online casinos, including Bovada, SlotoCash and Planet 7.