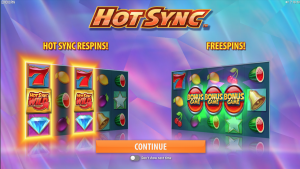 Quickspin has expanded its gaming portfolio with a new release, bringing the glitzy and colourful world of Las Vegas to your desktop, tablet and smartphone devices.

As most players are already accustomed to, the Free Spins game is triggered when three Scatters land on reels 2, 3, 4 – which gives the player a total of eight free spins.

Hot Sync Respins feature takes bonus rounds to a whole new level with triggering reels becoming Hot until the end of the game. Two or more Hot Sync Wilds activate this feature, which can prove very lucrative, with fantastic winnings up for grabs.

Swedish developer, founded in 2011, is famous for its world-class game line-up, with titles such as Dragon Shrine, Gold Lab, Spinions Beach Party, and many more. The quality of their games has been quite impeccable, and since the company was bought by Playtech in 2016, we can expect even more from them.

Based in Stockholm, with offices in Malta and recently available in the highly competitive Danish market, Quickspin has been the choice of many of the world’s leading operators, who require only the very best for its customers.

The entire portfolio of the company is available in HTML5, with the in-house developed platform offering a seamless user experience. But, Quickspin’s plans do not end here.

As Daniel Lindberg, Quickspin’s CEO, announced, ten new games are expected to arrive this year. No doubt this will further increase the company’s presence on the market and give the players some of the most compelling content to select from.