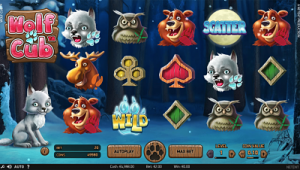 Wolf Cub slot debuts in all Net Entertainment casinos after it was initially only available at Betsson Casino.

Initially released back in February, exclusively with the Betsson Group, Wolf Club now arrives in all NetEnt casinos across the globe. Expect a winter adventure, with lots of opportunities to grab reward prizes.

Wolf Cub is a five-reel three-row video slot with 20 fixed paylines, while transparent reels are set against a winter background, featuring the vast array of woodland animals and a cheerful soundtrack.

The game's coin denomination ranges from $0.01 to $1, while the wager itself – depending on both the coin value and the selected bet level – can be anywhere between $0.20 and $200 per spin.

This NetEnt release is a medium volatile game, which promises well-balanced payouts and an equal appeal to both penny punters and high rollers. The game's expected return to player is 96.34%.

The Wild symbols can appear during the Main Game and the Free Spins, and substitutes for other symbols except for the Scatter.

It's also the symbol delivering the title’s maximum payout of $2,000 for landing five of a kind.

At least three Scatters are needed to trigger the Free Spins feature. The Free Spins round consists of two parts: in the first one, all the reels change into Scatter symbols bearing different numbers. The number on the reels will give the number of Free Spins, once the reels stop.

The second part of this feature is when you'll actually have the chance to use all those spins you won.

The company has a vast portfolio of 200 premium casino games, while its 1,000 employees strive to provide only the very best to demanding markets across the world.

NetEnt serves over 170 international casino operators worldwide, and has offices in Sweden, Malta, Ukraine, Gibraltar, Poland and the United States.