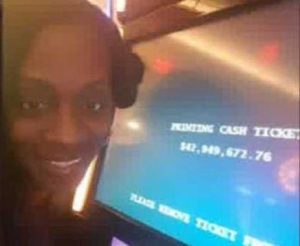 Having spent her early years in foster care and becoming homeless as a teenager, Katrina Bookman struggled almost her entire life.

Single mother of four had thought she finally broke the duck late in August when she won the jackpot worth $42.9 million at Resorts World Casino in Jamaica, Queens.

“I can’t even describe the feeling, like my whole body just got numbed”, she was quoted explaining the feeling to CNN.

Katrina captured the moment with a selfie before getting surrounded by casino security who escorted her off the floor telling her to come back the next day for a decision.

Thinking she had become the winner of the largest slot machine payout in history, little did Katrina Bookman know that her luck would suffer a disappointing turn overnight. Instead of cashing out a life-changing amount, she ended up being the winner of a complimentary steak dinner.

Having come back the next day to presumably claim her jackpot, Katrina was stunned to find out the exact size of win was – nothing.

The New York State Gaming Commission said that Bookman’s machine had malfunctioned which ultimately voided her prize. Instead of walking home with nearly $43 million in her pocket, the mum of four was offered a complimentary steak dinner by a casino employee.

“All I could think about was my family”, she broke in tears explaining.

Katrina had already allocated $1 million of the winnings to her son, hoping to help him buy a barbershop. She also intended to donate a large portion of her win to the community, but in the end her joy and happiness were short-lived.

The Sphinx slot machine she played on is capped on the maximum amount of $6,500 and the malfunctioned machine was removed from the casino floor and taken to be repaired immediately after the incident.

Bookman has already taken legal action against the casino however, with her attorney Alan Ripka believing that denied payout may be less about the void and more about the amount she had won. Ripka hopes to get Bookman at least the maximum amount offered by the machine she had played on.

Katrina Bookman is hoping for the consolation prize she would then use to treat the casino employee to a steak dinner.