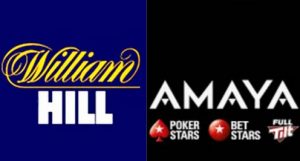 The talks follow 888 Holdings and Rank Group abandoning a £3 million merger after William Hill rejected two non-binding proposals earlier in August and a potential deal would conclude an erratic year for both companies.

UK betting company William Hill themselves confirmed the ongoing preliminary and non-binding talks with the Canadian operator Amaya, the PokerStars operator currently valued at approximately £1.9 billion with their shares rising by a third this year.

William Hill is currently valued at just under £2.6 billion with the company reporting a 16% decline in operating profits and a fall in share value by a quarter since last January.

Potential merger deal would eclipse any of the previous online operator deals and would make the new company the largest global online gaming operator by EBITDA and second-largest by revenue.

“The potential merger would be consistent with the strategic objectives of both William Hill and Amaya and would create a clear international leader across online sports betting, poker and casino,” William Hill said.

The two companies could go on to create a combined operation worth approximately £5.7 billion which would boast a significant revenue synergy potential from using William Hill’s sports and casino expertise to leverage Amaya’s poker customer base.