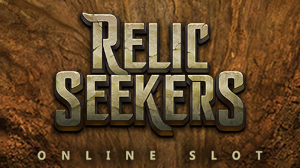 The leading developer of online slot games Microgaming has recently introduced the latest addition to its extensive portfolio of video slots.

Titled Relic Seekers, this fantasy-themed game is developed exclusively for Microgaming by their partners at Pulse 8 Studios, specialized in creating content inspired by Asia.

Relic Seekers is a 5-reel 3-row slot with 25 paylines, that promises to take players on an epic adventure set in the ancient tomb of the Dragon's Vein.

Players will join a trio of brave adventurers, Free Man, Professor Morgan and Nora, as they get ready to reveal mysterious secrets of the Dragon's Vein, the relic from the era of the Yellow Emperor.

As these fearless explorers do deeper into the ancient tomb during the Main Game, they'll be accompanied by several thrilling and potentially lucrative features, such as the Symbol Turn Wild and Rolling Reels, which are sure to boost the excitement and make the overall experience much more exciting.

The Rolling Reels feature is activated whenever a winning combination is formed, which will case symbols to explode with new ones falling into empty places. But that's not all, as consecutive Rolling Reels can activate the Symbol Turn Wild feature, turning high-paying symbols wild and offering handsome payouts to those who succeed in triggering them.

To spice up this experience, simply land at least three Scatter symbols anywhere on the reels. This will unlock the game's Free Spins round, awarding an initial batch of 10 spins. This feature will take players even deeper into the ancient tomb, with many prizes waiting to be claimed along the way. The ultimate prize is collected by gathering secret keys and include additional spins and a 2x multiplier.

Commenting on the launch of the game, James Buchanan Director of Global Operations at Microgaming said Relic Seekers set the bar high for future releases from Pulse 8 Studios by offering an immersive playing experience, with captivating visuals and features. He also added they were delighted to be working with their new partners on an exclusive basis.
This mysterious adventure is waiting for you at any Microgaming-powered online casino.