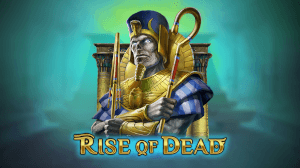 One of the leading names in the online gaming business Play’n GO has recently announced the launch of the latest addition to its extensive offering of video slot games.

The company’s most recent game to hit the market is titled Rise of Dead and promises plenty of excitement and even more chances for punters to claim handsome cash prizes.

An Ancient Legend Is Coming to Life

Play’n GO’s new release draws its inspiration from the Ancient Egyptian mythology, and focuses on the famous legend of the Book of Thoth. According to the legend, this book can grant unlimited knowledge to its reader.

In terms of feature, Rise of Dead includes several interesting and potentially lucrative features, such as the Ancient Spin, Mega Stacks and the Gift of Gods, offering players plenty of different ways to scoop huge prizes.

We should point out that Play’n GO’s developers paid special attention to the historical aspect of the new game, which is seen in the design of the symbols. On the reels, players will encounter the famous Egyptian Pharaoh Ramses, as well as the Golden Scarab. But that’s not all, as two other Pharaohs also await, Thutmose and Amenhotep, and of course, the book of Thoth itself.

All in all, punters of all types can look forward to the new release offering lots of fun, but also accuracy and depth, which is very important in games like these.

Commenting on the launch of the new video slot, Johan Tornqvist, Chief Executive Officer at Play’n GO pointed out that Egyptian history and mythology was a very popular subject matter, be it in films, TV or games. He added the company always aimed not only to do justice to the source of their games inspiration but also to bring a different element to it, something that people might not be familiar with or hadn’t seen before.

Tornqvist explained it was something that separated their games from many others in the market at the moment and represented a testament to the creativity of the company when it came to creating entertainment.

The legend of the Book of Thoth is waiting to be explored at any online casino powered by the renowned developer.