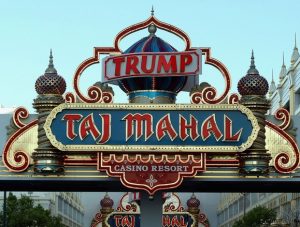 The month of October was not the best of months for Atlantic City’s casino industry.

Closing of the Trump Taj Mahal earlier last month induced a decrease in brick-and-mortar casino businesses across the city for the third straight month, NJ.com has reported.

October revenues suffered a drop in excess of nearly 3% to $186.4 million to $191.6 million only a year ago, the state Division of Gaming Enforcement revealed.

With the closure of Trump Taj Mahal, Atlantic City ended up losing its fifth casino in less than three years.

Atlantic City’s economic struggles have had a serious impact on the casino industry and Trump Taj Mahal casino is just last in a long line of closed down properties.

Once referred to as the “Eighth Wonder of the World”, the Trump Taj Mahal closed after several months of union strike, which casino’s management blamed to preventing a ‘path of profitability’.

The casino was forced to close down after failing to reach an agreement on new contracts for nearly 3,000 workers after the Trump Entertainment Resorts terminated the health insurance and pension benefits of union workers back in October 2014 as the casino was in bankruptcy court.

Despite the reported decrease in revenue, the elimination of one of the biggest competitors in Atlantic City’s gambling markets appears to have had a positive impact on seven remaining casino operators.

The survivors saw their revenues go up by almost 6% in comparison to the previous year with the Golden Nugget reporting the biggest monthly increase of even 16.7% to $20.6 million.

According to Matthew B. Levinson, chairman and executive director of the Casino Control Comission, October was a good month for the surviving casinos and their table games, slot machines and internet operations.

In that regard, the internet gambling continued to record a steady growth in New Jesrey despite the Trump Taj Mahal closure, bringing in $16.7 million which is almost 30% up from October 2015.

Without the Trump Taj Mahal in their way, Atlantic City casinos amassed $2.2 billion in brick-and-mortar and internet gambling revenues during the first ten months of the year 2016, which makes for a 1.4% increase for the same period in 2015.