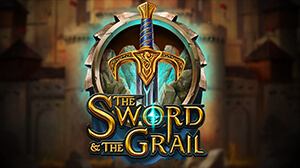 The leading developer of online casino content Play'n GO has just announced the launch of the latest addition to its diverse offering of high-quality video slots.

The company's newest release to hit the market is titled The Sword and the Grail and players can look forward to an exciting Arthurian-themed slot filled with exciting features and plenty of chances to score handsome payouts.

Another Legend Coming to Life

It should be noted this is the developer's second recently-launched game that draws its inspiration from the world of King Arthur, following the release of Rise of Merlin in June.

And while Rise of Merlin focused on the legendary wizard, The Sword and the Grail is centred on the wider story of King Arthur, his knights, and his entire court. The game's main protagonists are Merlin, Lady Guinevere, Arthur's trusted knight Lancelot, and of course – King Arthur himself, with all of them featured on game symbols.

The Scatter and Wild symbols are depicted by the Holy Grail and the Sword in the Stone, which plays an important part in the Arthurian legend.

The game will take players to an adventure of epic proportions, as they move through the ranks, from a mere squire to King of the Knights. To do so, players will need to make the most out of the slot's bonus game, where they'll collect swords in order to advance through the stages and increase their multipliers. According to the developers, this progressive aspect of the game further boosts the overall excitement.

Commenting on the launch of the new game, Johan Tornqvist, Chief Executive Officer at Play'n GO said the great thing about the Sword and the Grail was its challenging aspect, as winning was one thing, but you also had the chance to conquer the game by becoming the King of the Knights!

He pointed out players were going to want to achieve that title and added they would have lots of fun doing it so.

The Sword and the Grail can be played at any Play'n Go-powered online casino.