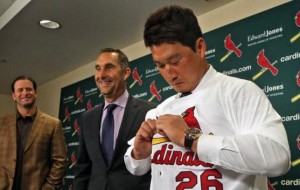 Gambling laws in South Korea are strict and they allow only one domestic casino for local players, while 16 others only admit foreigners. South Koreans are banned from betting large sums of money at other places than the designated local casino.

This wasn’t the first time former teammates from the Samsung Lions were fined for gambling as they were punished by the Korean Baseball Organization with half-season bans after prosecutors charged them for betting around 40 million won ($33.000) each at a casino in Macau back in 2014.

Oh, 33, signed a one-year contract with a club option for a second year with the Cardinals earlier this month.