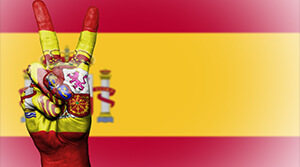 Sports Betting Is Becoming More and More Popular in Spain

Recently published a report on gambling in Spain revealed that the sports betting market had recorded a significant increase during the last six years.

The report was presented by the University of Carlos III in Madrid, and the Codere Foundation, while the Chief Executive Officer of Codere Vicente Di Loreto and the Head of The Directorate General for the Regulation of Gambling (DGOJ) Juan Espinosa García were also among those present at the event held at the University campus.

Apart from sports betting, ONCE instant lotteries also recorded a significant rise over the last year, followed by slot parlours, casino betting, and bingo halls. On the other hand, quiniela and coupon betting were less popular among players, while wagering through Christmas lottery recorded a somewhat surprising increase of 6.1%.

90% of all bets on sport were made either in person or using the internet (although both these methods were equally popular), while the remaining 10% was wagered on quinielas.

The main driving force behind the growth in land-based sports betting was the launch of sports betting shop across several autonomous communities. The current estimates say we can expect an even bigger increase during 2019, especially when it comes to betting shops, which have recently been authorised in Andalusia, the country's biggest individual market.

There Could Be Some Problems in the Future

Gaming has recorded its third consecutive year of growth – with gross gaming revenue in 2017 being 8% bigger than in 2015 and the overwhelming majority (945) of the total €9,408 million originating from the land-based operations.

The government has recently announced it will restrict gambling-related advertising and this move could seriously impact the entire industry since it suggests the prohibition of sports books advertising and closure of gambling halls which are located too close to schools. But, the biggest impact could be the increase in taxes, although it's not clear whether the government will actually go through with this idea.