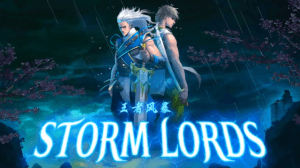 As announced, the new RTP video slot Storm Lords has just been released. Online casinos powered by Realtime Gaming will feature this brilliantly designed slot from here on out in their online slot rooms, and in case you’re wondering what the game is about we’ll have you know that it was inspired by Ancient China.

This is not the first time the Curacao-based company finds inspiration in oriental themes, and these games are usually quite popular among both US and non-US players. Infused with an anime style, Storm Lords features mysterious warrior characters which are somehow involved in a timeless battle of good vs evil. All good stories start like this, don’t they? It’s merely been days since the game became available across the RTG casino network, so make haste if you wish to benefit from some of the bonuses on this particular game that selected online casinos are offering in this initial period after the release.

Storm Lords has 5 reels and 50 variable paylines. All symbol combinations pay left to right, starting from the leftmost reel. The only exceptions are the Scatter symbols, the mystic Amulet and the Treasure Coin which pay in any position. The two heroes, Wind and Cloud, appear as substitute icons and will only land on reels 2 and 4. To adjust your bet amount, simply navigate to the bottom of the screen and use the arrows to increase or decrease your wager amount. Once you have selected your bet amount, click “Spin” to put the reels in motion. The game comes complete with Autoplay, Turbo, Max Bet and History tools.

Storm Lords from RTG is one feature-rich video slot. For instance, substitution symbols are not your average Wilds. When they appear on the reels, they will always nudge up or down in order to cover the entire reel and increase the winning potential. Furthermore, you can trigger the Wild Reels Feature or the Treasure Spins Feature, get as much as 6 free spins with specific symbols held in place during free games (Wind and Cloud are held on reels 2 and 4 during Wild Reels Feature, whereas Treasure Coins are held in all positions on reel 5 during Treasure Spins Feature). With a top award of 50,000 x the bet per line you should be able to survive any storm and tame a couple of Storm Lords.