Raiders Relocation to Vegas Is Freaking Everybody Out 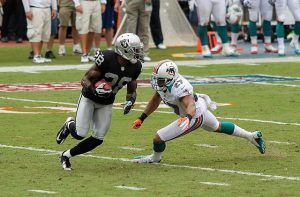 NFL officially approved the relocation of Oakland Raiders to Las Vegas by the 2020 season, with the move causing major controversy.

First of all, many see this move to be against the NFL's standpoint on gambling, but more important, it seems the very reputation of the National Football League could be at stake.

A poll conducted by Seton Hall University, New Jersey, showed that nearly half of Americans believe the Raiders' relocation to Sin City could backfire in a serious way. 46% of the poll's respondents believe that players and referees will bet on the games' results.

However, the majority (47%) believe the professional teams won't be influenced by the fact they're based in Vegas, while a significant portion (27%) thinks teams should avoid the most populated city of the state of Nevada

Players betting on the outcome of their own matches could lead to serious problems, even questioning the regularity of the games. Also, the possibility of referees betting on the games brings back the bitter memories of Tim Donaghy, former NBA referee.

Back in 2008, Donaghy was sentenced to 15 months in prison for his participation in the gambling scandal, after it was revealed he used to bet on NBA games in which he was able to decide the result.

Maybe this is the reason why 21% of the poll's respondents are firmly convinced the league's reputation is in jeopardy.

Rick Gentile, poll director, said such concerns were expected, since the mere mentioning of Las Vegas brought certain not so positive associations.

Even John Madden, NFL legend and former Raiders coach, was somewhat disappointed by the relocation, expressing major concerns over the influence of Sin City on some players.

We live in an age where gambling and sports betting are available 24/7 via desktop or mobile devices. If a player (or even a referee) wants to put money on a game he plays in, he can do that in a number of ways.

If someone wants to bet, nothing will stop him and on the other hand, betting is not obligatory in Las Vegas – if you don't want to do it, you don't have to. Anyway, all our questions will be answered in couple of years, when the relocation is finalized.