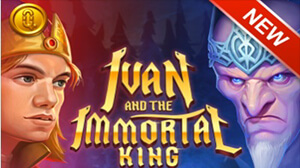 The slot features a vast array of colourful characters from Russian folklore.

Quickspin has announced the launch of the new Ivan and Immortal King video slot, which represents the newest addition to the company's line-up of games.

The latest release draws its inspiration from classic Russian folklore and is sure to attract attention from players on online casino sites around the globe.

Coming to a Casino Near You

Ivan and the Immortal King is a 5-reel 3-row game with 20 paylines and the reels populated by beautifully designed symbols featuring jewels and the aforementioned characters.

Players will also encounter a grey wolf and a dragon with three heads among the game's icons, while the highest-paying one is the golden Wild symbol that can award hefty payouts going up to 100 times the triggering stake.

Be on a lookout for Baba Yaga, the benevolent witch that appears randomly to the side of the grid, and when she does so she'll add a number of symbols of the same kind to the reel, significantly increasing your chances of getting a big cash reward.

It's All About the Free Spins Round

The treasure chest icon serves as the game's Scatter symbol, with 3, 4 and 5 of a kind awarding 10, 14 and 18 free spins respectively. The Free Spins round can prove to be extremely lucrative, especially as there are multipliers on offer, which are all connected to one of the characters from this legend.

Depending on the number of Scatters used to trigger the feature, the Free Spins round will start with either a 1x, 2x or 3x multiplier, while additional Scatters will increase the size of the multiplier. With sufficient luck, players can unlock a multiplier going up to 20x.

Commenting on the launch of the new game, Daniel Lindberg, Chief Executive Officer at Quickspin said the company's development team had delved into the passages of ancient Russian folktales to bring this story to life.

He stated the team had enjoyed every minute creating this game and added Quickspin was sure players would treasure this fantastic slot for years to come.