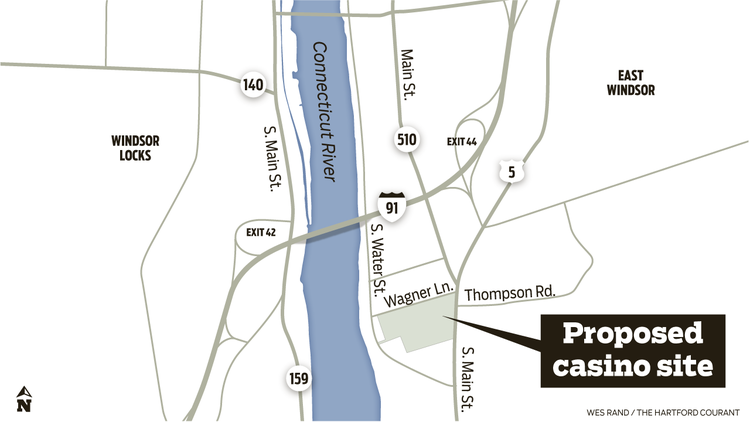 The proposed location for an East Windsor casino is located on the corner of Wagner and Route 5, which is a 33 acre parcel of land, states the First Selectman Bob Maynard on Tuesday night.

Mr. Maynard stated that he has not announced this site to the public previously out of his respect to the developer that had submitted the bid in order to build the casino CenterPlan Cos.

The site is currently home to two businesses, a U-Haul rental and storage as well as Lomac Ltd, which is a family owned business that services and sells industrial, homeowner and farm Kawasaki and John Deere equipment.

This news brought many questions from local residents such as, why the former Showcase Cinemas and Wal-Mart that boarder Route 5 and I-91 considered?  How will this new development impact the school system?  Are the town officials in fact concerned about working with CenterPlan after the news of their problems pertaining to the development of a baseball stadium that was located in Hartford?  How does this new plan affect traffic?  Can Route 5 in fact handle the amount of traffic that the new casino will attract?

There are no specifics at this time on how big this new casino will be – The people have questions that do need to be answered, Marie DeSousa stated.

This announcement that came on Tuesday night, came nearly two months after the Mashantucket Pequot and Mohegan tribes under the joint title of MMCT had collected applications from local developers as well as towns that were interested in building a casino located near Hartford.

Mr. Maynard stated that officials will now wait to hear from the tribal nations before they move forward on the plans but also stated that any decision that would be decided with a referendum.