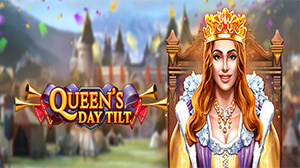 The slot pays for matching two and more symbols vertically, horizontally or diagonally.

The renowned developer of online casino games, Play'n GO, has announced the launch of the latest addition to its extensive offering.

Titled Queen's Day Tilt, the new release is based on the Accession Day Tilts started under the reign of Queen Elizabeth I, focusing on the fun and festivities that take place during the celebration. The game is set during the medieval time and Play'n GO paid special detail to historical accuracy.

Queen's Day Tilt features a 3-reel 3-row layout, and it's the first such slot ever to be launched by Play'n GO. The classic slot game design has been updated to bring larger symbols which are more visible, whilst at the same time creating more action for punters.

To start getting payouts, players will need to form combinations consisting of at least two symbols – vertically, horizontally or diagonally. Winning symbols can form in multiple combinations, which will significantly increase the cash prize.

The reels are populated with a wide variety of symbols matching the game's theme. The low-value icons include green clubs, orange diamonds, red hearts and blue spades. The Lion’s crest, the Rose crest and the Ram’s head crest will pay a bit more, while the symbols awarding handsome payouts are the red-caped and the blue-caped warrior, as well as Queen Wild.

Queen Wild symbols, as usual, can substitute for other game symbols, helping players form additional winning combinations. However, Wild can be a part of a winning combination only if it's positioned as the centre symbol, while in other cases it will be removed from the grid.

Players are sure to benefit from such features as The Ruler, which occurs after non-winning spins, and The Queen's Day, which is basically the Free Spins round. The latter has the potential to award lucrative prizes, as it will double any winnings that occur while the feature is active.

The launch of Queen's Day Tilt comes only a week after Play'n GO was named the Slot Provider of the Year at the International Gaming Awards.

No doubt the new release will quickly become popular with players around the world, who can check it out at any of Play'n GO-powered online casinos.