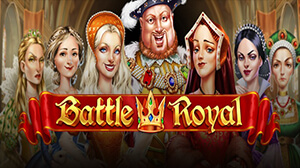 Play'n GO has recently launched a brand-new video slot, that will take players a couple hundred years back in time.

The renowned developer's latest release focuses on one of the most important rulers in the history of England, Henry VIII.

How to Win the King's Heart

Titled Battle Royale, the new game brings to the reels not only Henry himself but also his six wives, fighting for the king's affection.

The game is a comical take on this turbulent period in English history, and to make the whole experience even more entertaining, punters can look forward to Wilds, Scatters, and bonus features, but do watch out, cause you might lose your head along the way.

Battle Royale is 5-reel 3-row video slot with a total of 20 paylines, playable from a mere $0.20 per spin. The game's reels are populated with symbols divided into lower-paying ones, which include playing card suits, and higher-paying ones, where you'll find Henry's six queens.

The king serves as the Wild symbol, while the game logo acts as the Scatter.

The list of features starts with the Royal Flush feature, which is activated at random, and which can lead to neat payouts as it turns all low-value icons into the same symbol.

Once scatters land on reels 1 and 5, players will be able to choose between two features: Free Spins or Long Live the King.

The Free Spins feature brings a guillotine on the reels, which will fall on every spin. If one of Henry wives land below a falling guillotine, she will lose her head, turning wild until the feature ends. The feature continues until only one wife remains. But that's not all, as a guillotine landing on her hand will trigger the Long Live the King feature.

This feature can be activated either from the Free Spins game or when Scatters find their place on reels 1 and 5. The goal of this feature is to get the king out of the castle, and collecting riches while you're at it. Henry will be chased by the ghosts of his beheaded wives, so you need to be quick. Get the king to safety and you'll be rewarded with extra multipliers.

This humourous slot is definitely worth checking out. You can find it at any online casino powered by Play'n GO.