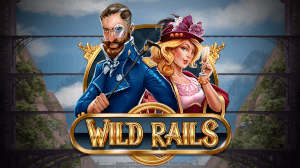 The Swedish online slot specialist Play'n GO has recently added a brand-new game to its offering of slots.

The 5-reel release is titled Wild Rails and represents a ground-breaking launch for the renowned gaming company, as it's Play'n GO's first horizontal reel game.

This means punters will not see symbols travel down the reels, which is something we're used to when it comes to the majority of slots on the market but will instead travel across them.

Play'n GO is very proud of its new game, as it confirms its reputation as a leading company that pays special attention to introducing new and innovative ideas in their creations. This is done to keep players entertained, and is a strategy that has helped Play'n GO become one of the leading names in the online gaming industry.

The new game made its exclusive debut last week at an invite-only event held at the WGES conference in Spain, and it was positively received.

Once the reels start spinning, the players may be confused by its unfamiliar looks, but its stunning visuals will no doubt knock you off your feet! The game offers smooth gameplay, with a special focus on mechanics of the movement and speed of the reels.

The overall atmosphere reminds of such classic movies as Murder on the Orient Express, as it takes players back in time to an age when travelling by train was an exciting way to move around.

2019 has so far been one of the most successful years in the company's history, and with games like this being released will further cement the position Play'n GO has on the regulated market around the world.

Commenting on the launch of the new game, Johan Tornqvist, Chief Executive Officer at Play'n GO said the company was excited to still be able to do something news like a true market leader.

He pointed out that Play'n GO loved trying out new concepts and idea, and pointed out they were on track for their most successful year ever.

Tornqvist also said games like Wild Rails were the one to continue that track and lead the company into the future.

Play the game at any Play'n GO-powered online casino.