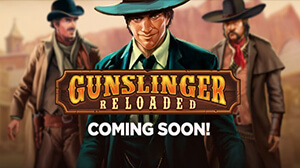 Play’n GO Is Taking You to Wild West with Gunslinger: Reloaded Slot

The sequel to the 2008 title is expected to become as popular as the original.

Back in 2008, Play'n GO launched its Gunslinger slot which went on to became a smashing hit among punters worldwide. Now, a whole decade later, the renowned developer is getting ready to launch a sequel to the popular video slot.

Titled Gunslinger: Reloaded, the slot brings an exciting Wild West theme and is expected to become as popular as the original.

The original Gunslinger game brought the spirit of the Wild West straight to the reels with symbols such as gunslingers, revolvers, wanted posters, whiskey bottles, and, of course, the usual set of playing cards as low-value icons.

In terms of graphics, the new game will offer sharper graphics, although the appearance of the upcoming slot will be almost identical to the original one. In terms of gameplay, expect a thrilling experience which starts as soon as you hit the spin button.

The most appealing part of this game are its potentially lucrative features, while a progressive jackpot promises handsome payouts to those punters with enough luck.

Gunslinger: Reloaded features has 5 reels and 3 rows, as well as a total of 25 fixed paylines. Players will have a chance to trigger the progressive jackpot which will keep on growing until it's paid out.

The game has two sets of Scatter symbols and two Bonus Rounds that can be triggered. Bottle Scatters award from 10 to 25 free spins while doubling all the wins made while the round is active. The feature can be retriggered, while the good news is there's no limit to the number of times the round can be reactivated.

Be on a lookout for Wanted Poster Scatter symbols, which can activate the Bounty Bonus. During this feature, where the chase all over town streets will begin. The Bounty Hunt is a feature consisting of several stages, with each new stage offering bigger and bigger.

The new Gunslinger: Reloaded is set to go live on October 25. Once the game hits the market, you'll be able to check it out at any of Play'n GO-powered online casinos.