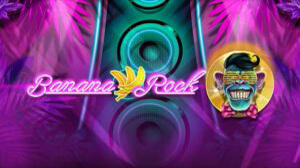 The game benefits from two Wilds, respins and free spins.

The game brings an 80s theme and its main stars are five monkeys playing in a rock band. Therefore, players can look forward to a great soundtrack, as well as exciting and potentially lucrative features such as respins, free spins, Wilds and multipliers.

On the reels, you'll encounter symbols including the playing card icons (A, K, Q, and J), along with five top-paying symbols featuring a member of the band.

There are also two Wild symbols on offer – a standard one, which can turn into other symbols bar the Scatter and a lead singer Wild. The game logo serves as the Scatter, appearing only on the leftmost and the rightmost reels.

Two or more Wilds landing anywhere on the reels will activate the Rock ‘n’ Rolling Respin feature, where you'll see the lead singer of the band dancing across the grid, leaving a trail of Wild symbols after him.

Make the Most out of the Game's Features

To trigger the Free Spins round, players will need to land two Scatters, and if they manage to do so, they'll end up getting 10 spins. The main objective of this features is to collect all band members by landing their stacked symbols on the reels. Collecting them will fill the power meter, applying a multiplier ranging from 2x to 5x to any winning combination formed with one of the band members.

After you use all 10 spins, the Encore Spin mode will commence, where you are guaranteed a win as only the band members appear on the reels. Any multiplier from the Free Spins round applied, while during this round it can go up to 25x.

This game definitely has an unusual theme, but it seems the risk has paid out. Players will be looking forward to playing this title, especially the Free Spins round, which offers a lot of potential for huge payouts. As we've already mentioned, the game is live and you can play it at online casinos powered by Play'n GO.