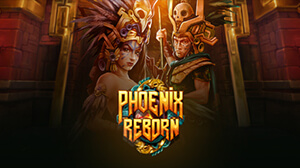 One of the leading names in the online gambling industry Play'n GO has recently added a new video slot to its offering.

Inspired by the ancient Aztecs, Phoenix Reborn has 5 reels, 6 rows and a total of 40 paylines. Play'n GO's the latest addition to its portfolio boasts stunning visuals and a high-quality soundtrack. A minimum of three matching symbols is required to start getting payouts.

The symbols on the reels perfectly match the game's theme and include the usual set of low-value playing card suits, as well as the Black Panther, the Green Mamba and the Hornbill. The top-paying icons feature the burning Phoenix, the Aztec Princess, and the Aztec Wizard.

The Phoenix serves as the Wild symbol substituting for all other symbols bar the Scatter thus helping players form additional winning combinations.

Scatter symbols are used to trigger the game's Free Spins round. Be on a lookout for Phoenix flames symbols as they can expand to cover the entire reel once they finds its place on the grid. Players are sure to benefit from the Rise of the Phoenix feature, which can award up to 20 free spins to players with enough luck.

While the Free Spins round is active, players can trigger additional spins by landing at least three more Scatters, while the Wild Phoenix can expand across an entire reel on each and every spin. This means that up to 4 additional Wilds can find their way to other reels. Be on a lookout for the Aztec Mask Scatters, as two of a kind can also trigger additional free spins.

The luckiest among players can grab payout going up to 5,000x their wager.

Speaking about this game, its designers said that since the math of the game finalized early on, they had been able to really focus on the design aspect of the game and that they had been highly motivated to deliver a visual spectacle. They added that graphical elements were something special, which they knew players would enjoy.