Okada Manila Set to be Opened 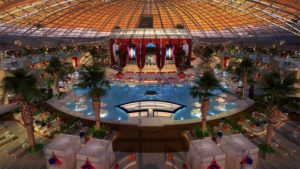 After a one-month delay, the $2.4 billion integrated casino resort and entertainment facility, owned by Japanese billionaire Kazuo Okada and his business partner Antonio Cojuangco, Okada Manila is set to be opened this week.

With its opening scheduled for Wednesday, 21 December 2017, the 44-hectare top-notch integrated operation featuring a two-wing hotel with 993 rooms and the most prestigious accommodations is opening its doors in the middle of the festive season.

Following a month of unflavoured weather conditions with delayed the construction, Okada’s company Universal Entertainment Corp. raised $200 million from insurance of privately-placed notes in November to finance the operating costs for the opening of the resort which is planned to be performed in stages.

The Grand Opening is expected in the first quarter of 2017, whereas March remains the current target day.

Well over 18,000 workers are still working on the site to make sure the completion of the casino is done in time for Wednesday’s promotion.

Okada Manila will feature an iconic dancing fountain which will be rivalling that best of Las Vegas and Dubai and will be the first resort to fully implement a 360-degree water projection.

All rooms of the two-wing hotel will feature stunning views of Manila Bay or the fountain that is expected to become a landmark for the venue.

Okada Manila’s casino floor will be spread across over 26,000 sqm and will boast up to 500 table games and 3,000 electronic gaming machines. No less than 21 food and beverage outlets will be serving international cuisine to fit everyone’s tastes and flavours.

The Japanese billionaire Okada’s facility is holding one of the four provisional gaming licences issued for the Manila casino hub back in 2008.