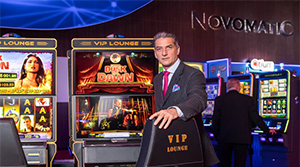 The company faced regulatory changes in some of its key markets during this period.

One of the leading European gaming companies Novomatic announced its semi-annual results, which show a significant rise in revenue.

According to available information, during the first half of this year, the firm set a new record by generating 12.6% more revenue. This result is very important, since the company faced certain difficulties during this period, namely regulatory changes in some of its key markets.

An Excellent Period for the Company

During the six-month period ending on June 3, 2018, Novomatic sales recorded a jump to €1.4 billion. Sales revenue from gaming machines – which almost doubled when compared to 2017 – was cited as the main driving force behind such a result.

Ainsworth Game Technology Ltd, an Australian manufacturer of global gaming products was acquired during this period, along with a number of other smaller acquisitions in Germany, Italy, Spain and Eastern Europe, primarily in the areas of slot arcade operations, bar installation and sports betting. These moves should further strengthen the Group’s position in some of Europe’s core markets.

We mustn’t forget performance improvements in Novomatic’s core markets, which is a factor that also had a significant impact on the overall results.

Novomatic has also announced that its earnings before interest, taxes, depreciation, and amortisation (EBITDA) went up by 11.6% to €318 million. The company’s operating result (EBIT) increased by 23% to €148.4 million despite regulatory changes in Germany and Italy.

Nearly 700 jobs were opened during the first six months of 2018, with the current number of 26,230 employees reaching an all-time high. The additional workforce was required due to the company’s expansion.

Commenting on the latest report, Novomatic Chief Executive Officer Harald Neumann said the result confirmed the firm’s strategy of consolidating its market leadership in existing markets and of opening up new markets and technologies through acquisitions.

At this time, the company wants to consolidate the rapid growth achieved during the recent years, which was driven by its acquisition strategy.

Speaking of this, Neumann stated the focus was on optimising internal processes and structures across borders.