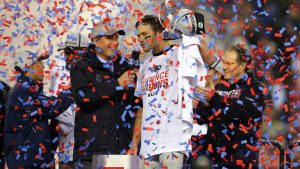 The 51st Super Bowl was held in Houston last Sunday and was marked by a thrilling New England Patriots comeback, who outscored Atlanta Falcons and won their fifth league championship thanks to an outstanding showing in the final quarter.

Apart form the Pats fans and the evergreen Tom Brady who won his fourth Super Bowl title, the final game will also be a fond memory of many Nevada bookmakers.

They not only enjoyed record betting volume, but also managed to secure their third largest earnings since 2010.

According to the official Nevada Gaming Control Board data, the total amount handled by the Nevada sports betting operators was more than $138 million, almost $6 million higher in comparison to last year.

To gain a full perspective of this growth, we must return to 2013 when Super Bowl earned $99 million, 40 percent less than a couple of day ago. The main reason for such an increase is mobile betting. Let us give you a simple example: a man lost $1.1 million via his mobile phone, betting on the Dirty Birds in the unbelievable season finale.

The Silver State’s bookmakers kept $10.9 million of the total bets, a 7.9 percent hold. Still, the most lucrative Super Bowl in this decade was the 2014 New Jersey Seattle Seahawks win over Denver Broncos which earned them $19.7 million.

The year Nevada bookmakers want to forget is definitely 2008, when they lost $2.5 million after the Giants pulled-off a stunning last quarter comeback and defeated New England Patriots. This is also the last time the books didn’t win any money on a Super Bowl match.

The infamous second half of the Super Bowl match proved costly for a number of bettors. An unnamed man lost nearly a half a mill, while an angry fan smashed a brand new video wall at a sportsbook. The beer bottle he tossed on the video wall will probably be the most expensive drink he ever bought since he’ll be charged with the repair bill. Not to mention the lost wager.