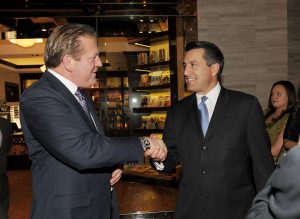 Brian Sandoval, the governor of the state of Nevada discussed the topics of online gambling with the United States Attorney General Jeff Sessions.

The meeting between the two was held last week, when they went through a lot of issues, but online gambling was certainly the hottest one.

According to recent reports, Sessions is thinking of reinforcing a federal ban on online gambling, which would come into effect even in those states that have already legalized iGaming, such as New Jersey, Delaware and Nevada.

Session had on numerous occasions expressed his disapproval of the 2011 Department of Justice ruling, which allowed the regulation of online gambling on a state level. However, there have been no concrete actions by Sessions.

There are many factors to consider when it comes to this issue. One of the most important is the involvement of Sheldon Adelson. Adelson is an American business magnate, the CEO of Las Vegas Sands Corporation, a global casino and resort operating company.

It is easy to understand why Adelson is a fervent opponent of online gambling. During the US presidential campaign, he donated substantial funds to the Trump campaign. Some say Sessions is under a lot of pressure to deal with this issue.

Nevertheless, it is still unclear which group – the one opposing or the one supporting online gambling – will prevail.

Brian Sandoval, the governor of Nevada, is also the vice chairman of the National Governors Association, the group that recently wrote a letter to Sessions, urging him not to reinstate the federal ban. Sandoval has said on multiple occasions that states can effectively regulate their respective gambling markets, offering maximum security to their clients and even prevent underage gambling a lot more efficiently than brick and mortar casinos.

It is still unclear what will Sessions do next. According to media reports, Sandoval was very convincing in presenting his reasons why the federal ban shouldn't be reintroduced. Attorney General may not take Sandoval's opinion into consideration, but Sandoval definitely won't step down without a fight. That's for sure.