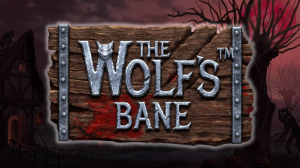 NetEnt has announced the launch of the new video slot, themed around the mystical creatures of the night.

Titled The Wolf’s Bane, this fresh release will take players on a quest to save a small village from destruction, offering exciting and immersive gameplay, as well as numerous chances to scoop neat prizes.

Watch Out for the Full Moon

NetEnt's latest addition to its portfolio features a standard five-reel three-row layout, with a total of 10 active lines. The reels are populated with symbols matching the game's theme, and its list includes werewolves, soldiers, village-folk, and full-moon scatter symbols. A minimum of three matching symbols is required to start getting payouts.

The Scatter symbols are tasked with activating the Free Spins round, while other features on offer include Wild substitutions and a bonus pick-and-click feature.

The stunning design of the symbols will immediately draw players' attention, while the game's classic vibe is clearly seen as soon as the reels start spinning.

Not Feature-Rich, But Still Exciting

Some would say the game developers could have added a feature or two more, although the overall atmosphere more than makes up for that. The pick-and-click feature is the first of two features on offer, activated when the crossbow symbol lands simultaneously land on reel 1,3, and 5.

The Free Spins bonus round is something players can look forward to, as it offers a decent win potential. Landing 3 or more Scatters will trigger the feature, awarding players 10, 20, or 30 spin – depending on the number of icons used to unlock the round.

Commenting on the launch of the new game, Bryan Upton, Director of Games at NetEnt said The Wolf’s Bane was a beautifully designed slot that would make your hair stand on end. He pointed out its launch had been timed to coincide with Halloween and added it was a game with a classic theme that they expected to have great longevity and wide appeal thanks to its proven game mechanics.

Although not a feature-rich title, The Wolf's Bane still guarantees plenty of fun. Visit any NetEnt online casino and give it a try.