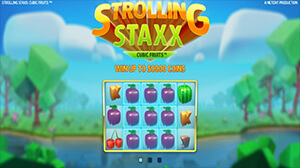 Strolling Staxx is the third game in the series following Neon Staxx and Butterfly Staxx.

The leading developer of online gaming content has announced the launch of the latest addition to its extensive offering of video slot games.

Titled Strolling Staxx, the fresh release represents one of the company's most ambitious games to date.

NetEnt is hoping 2019 will be a spectacular year for the company, and the launch of Strolling Staxx is definitely the best way to kick-off the new year. We should point out the new release is the third game in this series, following the successful arrivals of Butterfly Staxx and Neon Staxx.

The two previous instalments offered dynamic gameplay in combination with captivating graphics, and the latest arrival promises to bring even more excitement and opportunities to grab rewarding prizes.

Players will definitely appreciate the fact that Strolling Staxx is a feature-rich game, with the potential to award staggering payouts. Some of the most notable elements of this game include the Colossal symbols, Bonus Bets, re-spins and the Extra Chance. If you've wondered how did the previous two versions become so popular, Strolling Staxx might give you an answer.

The style of the game somewhat resembles a Nintendo-era game – Super Mario Bros definitely come to mind – although Strolling Staxx is a true video slot.

All in all, the game offers lots of fun and does have what it takes to keep players seated for hours. If you've ever played one of the two previous instalments, then the gameplay will definitely be familiar, although the game looks quite different from its predecessors.

Strolling Staxx features a 5-reel 3-row layout, along with 10 fixed paylines. The slot is playable from as low as $0.15, while the maximum wager can't exceed $300 per spin. NetEnt developed this game using HTML5, which means it can be played on a wide variety of devices.

The symbols paying out the biggest rewards are the Golden W, the Watermelon, the Strawberry, the Lemon and the Cherries. On the other hand, low-value icons include the playing card suits.

The Golden W is the game's Wild symbol, awarding hefty payouts for 5 of a kind across a payline.

Strolling Staxx can be played at any NetEnt-powered online casino.