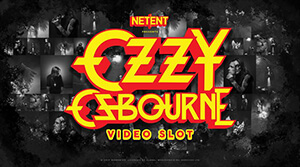 Ozzy will join legends such as Jimi Hendrix, Motörhead and Guns n’ Roses.

One of the biggest providers of online gaming content, NetEnt, has just announced it will soon expand its offering of slots with a new branded game.

The upcoming release will bring Prince of Darkness himself to the reels – Ozzy Osbourne, with the world-famous rocker being immortalised in the new video slot titled Ozzy.

Another Famous Rock Name Arriving on the Reels

Osbourne, who is an English vocalist, songwriter, became the lead vocalist of Black Sabbath in the 1970s, while his solo career started in 1979. Since then, Osbourne has sold more than 100 million albums around the world.

With this game, Ozzy joins other music legends who have already found themselves in a slot game, such as Jimi Hendrix, Motörhead and Guns n’ Roses.

NetEnt Director of Game Products, Bryan Upton said rock stars didn't come much bigger, better known, or charismatic than Ozzy Osbourne. He added that thanks to his larger-than-life personality and outstanding contribution to music, Ozzy had developed a loyal and passionate following over the past 50 years, and pointe out NetEnt couldn't wait to bring this to the reels for players to enjoy.

More to Come from NetEnt Soon

Over the course of his prolific career, Osbourne starred in a number of films and even had his own reality TV show called The Osbournes.

Under the provisions of the new deal with the company's merchandising partner, Global Merchandising Services (GMS), Ozzy will finally be featured on the reels.

Commenting on the new deal, Barry Drinkwater, the chairman of GMS stated NetEnt were the market leaders in their field and pointed out his side was incredibly excited to add another renowned artist to the exciting NetEnt Rocks family of games.

Apart from Ozzy, NetEnt is working on a whole new line of video slot games, which will include the adaptation of Conan, the mythical hero.

NetEnt is a leading provider of premium gaming solutions to the world’s most successful online casino operators. The Swedish gaming giant takes pride in delivering flexible digital casino solutions so that its customers can be unique, premium, informed and ahead, all at the same time.