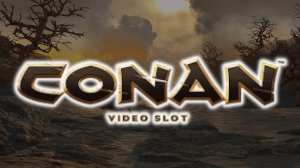 After premiering the new game at this year’s edition of ICE Totally Gaming in London, back in February, the NetEnt has finally launched its Conan video slot.

The renowned online casino slot developer posted a teaser video, which didn’t show much of the gameplay. That doesn’t matter, as the new release has been made available at any of NetEnt casinos out there.

The Barbarian is Here

NetEnt’s newest addition to its portfolio draws its inspiration from the 1980s movie Conan the Barbaria, starring Arnold Schwarzenegger and James Earl Jones, telling a story of an orphan who grew up to become a fearless warrior seeking vengeance for the death of his parents.

Conan now arrives on the reels, promising plenty of action and chances to win, along with stunning visuals and immersive gameplay. The slot offers 6 reels and 25 paylines, which can prove to be quite generous as they pay both ways.

The game boasts wide betting options, with the wagering staring as low as $0.20, while the maximum stake can’t exceed $200 per spin. On the reels, players will encounter a wide variety of icons – from a usual set of low-paying playing card symbols to those awarding substantial payouts, which includes the main protagonists of this story – Valeria, Thoth-Amon and, of course, Conan himself.

Landing the blue tower symbol on reels 1 and 2 will turn them into expanding Wilds, while mystery symbols appearing on reels 3 and 4 can also transform, while at the same time applying multipliers. Battle Wilds cover up to 3 positions at the same time when landing on reels 5 and 6.

A minimum of 3 Scatters are needed to trigger the Free Spins round, while the number of spins will depend on the number of symbols used to activate the feature. 3 Scatters will award 10 spins, while all 6 of them will see players start the round with 50 spins!

But there’s more as features such as City of Thieves, Temple of the Serpent and Walls of Tarantia can help punters score more wins.

Commenting on the launch of the new game, Bryan Upton, Director of Games at NetEnt said Conan was a perfect addition to the NetEnt portfolio of licensed titles.

Visit any NetEnt casino and give it a go.