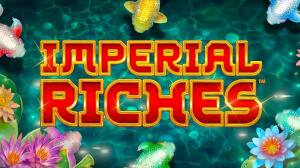 NetEnt has recently expanded its portfolio of video slot games by adding a new release – titled Imperial Riches to its offering. The latest adventure launched by renowned gaming company promises an exciting experience set in the Far East.

Imperial Riches takes players to a serene Chinese garden, with the design of the symbols drawing its inspiration from the Oriental theme. The game features the standard layout consisting of five reels and three rows, with a total of 15 paylines.

NetEnts fresh release brings the popular Avalanche feature, which will further add to the excitement in the Main Game. It works like this: whenever a winning combination is formed, the winning symbols disappear from the grid, and new ones falling into their position. This can lead to new combos being formed, thus repeating the entire process.

Once there are no more wins to be paid out, the feature will come to an end.

Imperial Riches doesn't feature a standard Free Spins round and instead offers a variant called the Free Falls. This feature is activated whenever 3 Scatter symbols find their place on the reels. Doing this will award players 10, 15, or 20 Free Falls, depending on the number of Scatter used to unlock the round.

Use Wild symbols and gems to further boost your winnings, with the latter holding the key to entering the Lucky Pond bonus games, where a Coin Fish or Bonus Fish can bring handsome prizes. The Bonus Fish has the power to launch the Jackpot Game. This where punters can win one of the 5 jackpots on offer – Rapid, Mini, Midi, Major, and Mega. Two of these are fixed, and three are progressive jackpots.

The game has already shown it has a huge winning potential, as the first substantial win – worth €134,222 – was hit on the same day the game was launched.

Commenting on the launch of this slot, Bryan Upton, Director of Games at NetEnt pointed out the game was packed with features. He said they were continuing with their Jackpot successes this year, with Imperial Riches but with their Avalanche mechanic. Upton explained the 3 stage nested bonuses gave players a chance to experience the Free Falls game, collecting jewels from wins for entry into another coin win feature and then a Jackpot bonus game.

You can play the new game at any online casino powered by NetEnt.