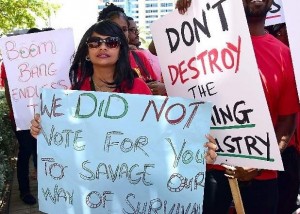 Over 9,000 casino employees could be affected by the Government as new taxes are likely to have a huge impact on gaming industry.

Trinidad Finance Minister Colm Imbert announced the increase in taxes during his mid-year budget review, but did not give any details regarding the proposed tax refinement.

Imbert claims that the gaming industry was already subject to a variety of taxes, but that compliance must be improved at this time, as many casinos and gaming business have not been paying their dues in time.

Gaming sector currently employs around 9,000 people, who could be hit by tax changes.

Assistant secretary of the Union of Members Club and Lottery Workers (UMCLW) Joshua Johnson reminded that in 2013 more than 2,500 workers were laid off and that a number of business force to close.

Worried that sucha a scenario could be repeated this year, more than 200 people, who are either employees or stakeholders in the local gaming industry, gathered outside the Parliament at Tower C on the Port of Spain Waterfront in protest.

Displaying placards outside the Parliament on Wrightson Road they called for consultation before Government proceeded with increased taxes in the gambling sector.