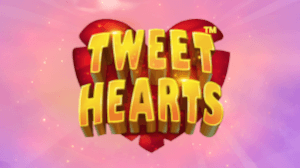 Microgaming has just launched a new game, a colourful video slot titled Tweethearts, developed exclusively by their partners at Just For The Win.

This exciting five-reel three-row release with 17 paylines takes players deep into a tropical jungle, where they'll be accompanied by parrots and a whole flock of thrilling and potentially lucrative features, aimed at helping them grab huge prizes.

Be on a lookout for such features as the Double Lucky Line, Random Wilds, Free Spins and 3 different types of Wilds.

As players enter the lush jungle, they'll encounter the Double Lucky Line, present from the very first moment the reels start spinning. Located on the middle row across the entire grid, whenever double symbols find their place on it, they'll be counted as two symbols – for all winning combinations and Free Spins symbols.

The Random Wild feature further adds to the excitement in the Main Game, as it has the power to turn 2 to 6 symbols positions into Wilds. This occurs while the reels spin, transforming the grid into an extremely exciting zone.

Make the Most out of the Game's Free Spins Round

Commenting on the launch of the new release, James Buchanan Director of Global Operations at Microgaming explained that Tweethearts combined colourful graphics, an idyllic atmosphere and a serene soundtrack to create a truly unique and charismatic slot. He said Random Wilds in addition to the Double Lucky Line feature added another element of excitement to the gameplay and pointed out this new title was set to entice players of all levels.

Johan Persson, Chief Executive Officer at Just For The Win said they were thrilled to introduce Tweethearts, a vibrant online slot sending players soaring deep into the heart of a secret jungle and delivering exciting gameplay along the way, and added they couldn't wait for players to experience the sights and sounds of Tweethearts’ jungle paradise.

Microgaming's latest addition to its portfolio is already available online.