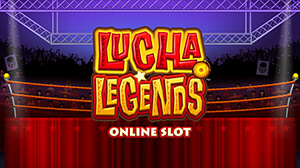 Lucha Legends draws inspiration from the colourful and exciting world of Mexican wrestling.

The leading online games developer Microgaming has recently expanded its portfolio of video slot titles by adding a brand-new game that brings plenty of excitement to the reels.

The fresh release is titled Lucha Legends, and as its name suggests, it draws its inspiration from the colourful and exciting world of Mexican wrestling, which is a theme the developer hasn't used before.

Lucha Legends has five reels, three rows, and a total of 25 fixed paylines on offer, while players can look forward to lots of action and a number of opportunities to score rewarding wins.

The reels are populated by vibrantly coloured symbols, including a bunch of Mexican wrestlers which also serve as the game's main icons. Meet Burro, El Diablo, Marito, Pepe, and Sal, while each of them brings a unique move that has the potential to award lots of cash.

Players are sure to benefit from the two selectable game modes on offer. In the normal game mode, the feature to be on a lookout for is the Super Wild feature, where either two additional wilds or a 2x or 3x multiplier can be grabbed.

As they perform their signature moves, the wacky wrestlers have the power to randomly turn Wild icons into Super Wilds, which is triggered by any winning or non-winning Wild symbols in the Free Spins round.

Players will have the chance to power up in order to win even bigger rewards. This can be done using the Power Up Mode, which is triggered in the Main Game but can be carried over into the Free Spins round as well.

Activating the Power Up Mode doubles the total wager and significantly improves the chances players have to get a win during the Super Wild feature, with four additional Wilds or a 3x or 5x multiplier up for grabs.

Commenting on the launch of the new game, David Reynolds, Games Publisher at Microgaming, said Lucha Legends was a fun and vibrant slot that tapped into the global popularity of professional Mexican wrestling, capturing the drama and excitement with several big-hitting features.

He added that in addition to 10 free spins, which could be retriggered, the Super Wild feature and Power Up Mode aimed to enhance gameplay and increase the player’s win potential. Reynolds also stated Lucha Legends was a beautifully animated game designed to deliver round after round of action and entertainment.

Packed with potentially lucrative features, and available across all platforms, Lucha Legends went live on October 31 and can be played at any online casino powered by the renowned developer.